The other day in Pythagorio in Samos I went to the green grocer and they had great fresh herbs.  I often buy them and then nearly as often throw them away as they go slimy in my fridge. So, determined to have as little food waste as possible I thought of what I could make that used a mix of fresh herbs. Chimichuri is an uncooked herb, oil, vinegar and chilli sauce that originated in Uruguay, originally used for meat.  I had 2 eggplants that needed cooking as I had kept them in the cupboard rather than the fridge.  They last pretty well for about a week that way but it was definitely time.

¼ cup chopped mint (it was the end of a bunch but more would be better!)

Mix all ingredients together and allow to sit until ready to use.  Left overs will keep in screw top jar in fridge for about 5 days.

Layer in a bowl/tray/plate with about 1 tablespoon of chimichurri per slice, turn and repeat until all have some herb mix on them.

Grill or BBQ eggplant until cooked through.  I have a terrible grill so I grilled each one and then layered them back into to dish I marinaded them in and cooked them in the oven for another 15-20 minutes.  You could probably bake them as well.

Top with more sauce and serve hot or warm.  They make great leftovers the next day. 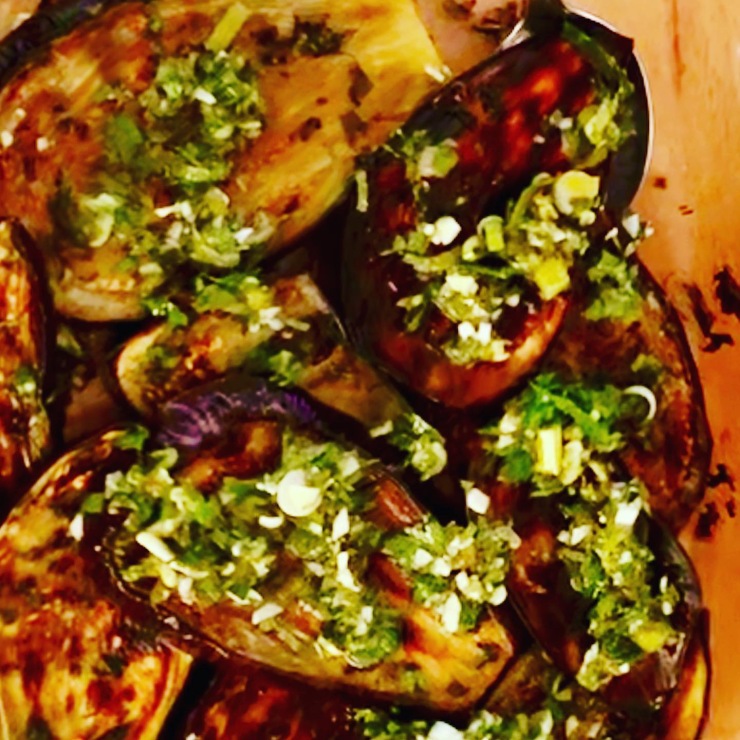 One thought on “Greek Chimichuri with Grilled Eggplant”

ocean-pilgrim goes on the road

We found our perfect boat and sailed in Greece and Turkey in 2019 and then COVID hit when we were back home, in Australia.  Overseas travel is a dream right now so we bought a VAN and  continue our vagabond life on the road (for the time being)