What’s in a Name?

Well, a lot really. It’s about personality…yours and the boat’s. It says something about what you align with…although I am not sure what that means for the guy at the end of our marina finger with the boat called BIG DADDY in big letters! I never said ego wasn’t involved.

So back to us now.  Our boat was named Celtic Breeze which is a nice enough name and I have Celtic ancestry but Rick does not as far as he knows. So how did that fit with us?  It certainly didn’t qualify in the easy to spell out in NATO phonetic alphabet: Charlie Echo Lima Tango India Charlie is a mouthful enough and then there’s a whole other word! And it just felt like we had no connection to it.

So, if we weren’t keeping it we had to come up with a new name ASAP as we had to get the paperwork in to change ownership and the name change gets submitted at the same time.

A note on that: The boat is registered in the UK and as Rick has a British passport we decided to keep the registration there as it was simple and easy to transfer. To change it to Australia was a lot of extra expense (no thanks, not more!) and we had heard it can take up to 4 months for it to get processed and we couldn’t leave Turkey until that was done. So that was not happening given we only have 90-day visas.

I spent all afternoon on various boat name websites and then moved onto Greek, Roman, Sanskrit names for ocean-y type words. Then Rick and I sat together and went through our choices. And thankfully, as we stripped away the names that really didn’t quite fit it was obvious what it should be – NO it is NOT the Lady Cath!  Thank you to those friends who seem to think this is the only possible choice! (This harks back to an incident when I was written about in a Nepali Newspaper and they forgot to put a comma between the words Lady and Cath in the headline making me the Lady Cath to my annoying husband and a number of other friends from that minute on).

Then we had to wait. We decided to register her in London as it is where Rick’s mum is from and we felt we needed some connection to the Port we chose.  Then they ask you for 4 name choices in case your first choice or second or third has been taken by someone else as only 1 of each name is allowed in each port in the UK. Over a week later our first choice came through.

So, I would like to formally introduce you to our new yacht the S/V Intention.  Easy to spell out. Easy for people to say and no awkward explanations about what the name means. And it has taken us good, strong and clear intentions to get us here and we are sure she has good intentions for us. That said, Rick did send the name to someone and it autocorrected on his phone to In-tension which made us laugh as at that stage there was a LOT of tension on board as we got ready to leave the marina.

Then we had to decide on what script to use for the name. Honestly there are about a million fonts out there! Fortunately, there are websites where you can put your word in and it writes it in every font. Unfortunately, I didn’t like a single one. I know: fussy!

Eventually we took a few I did find to a lady who would make up the new stickers.  She was able to get very close with a font she already had and then in a matter of 12 hours the names were ready to collect.  Off on the bus I went, yet again. 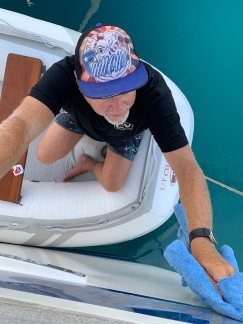 Cleaning the blue stripe ready for the name from the dinghy 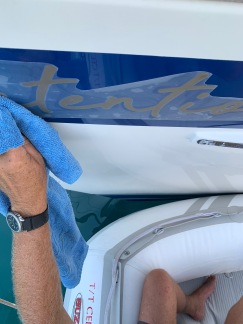 Sticking the name on 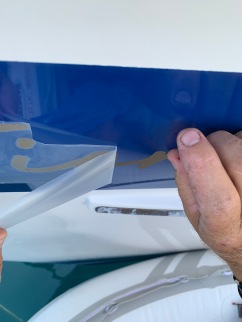 No bubbles in this awfully sticky stuff please!

Then there was the small matter of appeasing the Gods of ocean and wind and any others we could think of for good measure. We waited until we left the marina as invoking Gods on the pushpit of your boat is a tiny bit weird in amongst the doof doof music of super yachts. And I was slightly embarrassed to be honest. But I did buy champagne and we did get straight onto it our first night out.  Yes, this is breaking with tradition but our ‘intention’ was good! I researched yet again and there are a few traditions…getting a virgin to pee in the bilge wasn’t something we could manage but un-naming and then re-naming was. Asking Poseidon to remove Celtic Breeze from the ledger of the deep and then giving gratitude to her old name and her previous skipper, libations of champagne into the azure water and finally tossing something metal etched with her old name into the sea (a big old sinker and permanent marker did the trick given we didn’t have much in the way of etching gear on board!)  Then we named her by asking for the new name to be written in that very same ledger. We also spoke with the wind gods to ask for fair winds.  A few Hindu deities may have found their way into the prayers too…never hurts to get Ganesha on board to remove obstacles! Champagne was liberally poured over the anchor and into the water. Thanks for getting us here onto our amazing new boat were given liberally too.  Hope Poseidon has a taste for bubbles as there was no rum on board. 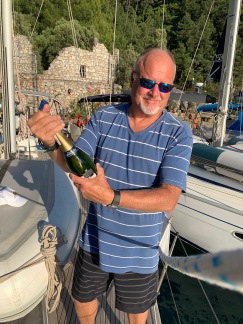 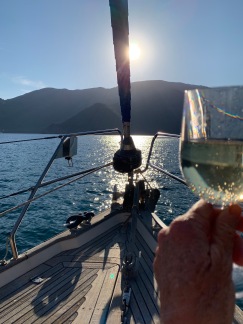 Now our job is never to mention her old name on board again and to remove all references to her old name from the boat….kinda impossible as we need all the paperwork.  That said the same marker pen has been employed on all sets of keys to good effect!

ocean-pilgrim goes on the road

We found our perfect boat and sailed in Greece and Turkey in 2019 and then COVID hit when we were back home, in Australia.  Overseas travel is a dream right now so we bought a VAN and  continue our vagabond life on the road (for the time being)